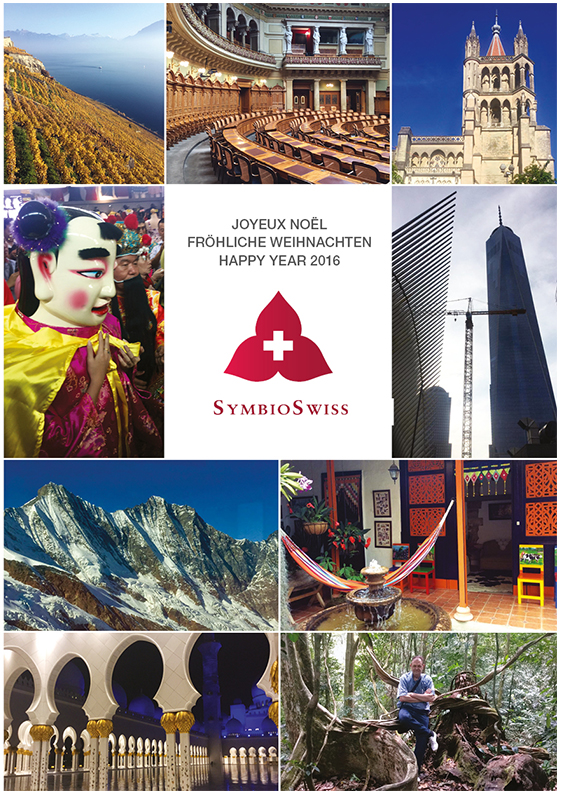 The world we live in today shows a marked contrast between such disturbing events as the wars that are taking place on multiple fronts and mutating like viruses, with refugees, migratory flows and the rise of terrorism; but on the other side more cheerful aspects like the smiles of children from all four corners of the world, the solidarity between people finding common cause and the everyday march of technology. The serenity of our mountains and these beautiful islets that we find virtually everywhere never cease to amaze me with their diversity and riches. So during this Christmas period let us enjoy the comfort and tender bosom of our families, sharing with friends and wishing goodwill to all others.

The dynamic flow of everyday life is often unpredictable, full of twists and turns. Little did I know when this year began how it would pan out. I scrupulously prepared for the electoral campaign for the renewal of the Swiss Federal Parliament, which my team and I carried out with great gusto. Debate basically centered on the matter of immigration, be it the free movement of persons between Europe and Switzerland or the refugee crisis. More than ever the cultural integration of migrants is essential to preserve the values of our western civilization. I found it very interesting to reflect on this burning issue and put forward, during the public debates in the media, some possible avenues for a solution. However that would not have been enough. One had also to gain visibility and to run a proximity campaign. My team and I stuck up posters all over the Canton of Vaud, after which I endeavored to “come down from the poster”, to be on the field and to meet the people. In fact it’s what I enjoyed most. What a marvelous experience it was to tour the land, to rediscover places that I had visited as a child, to be flagged down by passers-by and to engage in conversation with them! Whatever the outcome, this unique experience would have by itself fully merited to be enjoyed.

When a nominee becomes an elected representative, a kind of metamorphosis happens. Before, one was scaling a difficult slope, all senses being alert, with the hope to share one’s convictions, to convince people and finally to get more votes. All candidates were competing among themselves. However, once one has reached the peak, all of a sudden horizons are expanded; one can finally look to the future and start building. As far as I am concerned, I intend to commit myself on several fronts: to a country that remains open to the world in all its diversity, to the pursuit of bilateral negotiations between Switzerland and the European Union, to a smooth integration of immigrants (including refugees) while maintaining in our country a high level of security, to the strengthening of innovation and entrepreneurship, to a better acceptance of renewable energies and to a greater flexibility of the retirement age. It is true that it’s emotional enough to find oneself in the Federal Palace, realizing that one has now a duty toward those who have trusted in us. Taking an oath is more than just a ceremony protocol. It implies, above all, a sincere commitment that I, for my part, am profoundly aware of. I will try to remember that this seat does not belong to the person occupying it and that, for those having been elected; it is above all in order to serve! Luckily enough, a nice collegiality spirit seems to exist among most parliamentarians, beyond their respective partisan points of view. I will have the honor of sitting on the Foreign Affairs Commission and on the Legislature Commission. I have also been appointed as a deputy on the Economic Commission. I am really delighted.

Nonetheless it goes without saying that I shall continue to carry out my professional activities and contribute to the development of SymbioSwiss. We have managed this year to finalize the feasibility study of an ambitious industrial and logistical site project for the State of Singapore. And everything indicates that there will be a follow-up. We are in this way consolidating our presence in Southeast Asia. At the same time our company has stepped up its involvement in the field of academic publishing. It is now the largest shareholder of Peter Lang, a company which publishes over 1,500 book titles every year. At a time of digitalization, this publishing field has become highly interesting. It is like a new frontier. At SymbioSwiss, we are continuing to work on innovative projects in the area of CleanTech. We care in particular for Swiss NeWater and have spent much time to refine its technology. Other companies with which we are associated are also offering very interesting prospects, amongst them Tecuro (at the clinical trials stage) and SmartInst (who have won numerous prizes).

All this would not have been possible without a sense of harmony existing in the bosom of our family. Vincent is pursuing his life in Paris with courage and clear-headedness, surrounded by his wife and two children. He participated in the Zermatt marathon and a ten-day run in the Alps in order to raise money for medical research. Arnaud and Marie-Louise have a second child, Marie-Rose. Father Paul baptized her at the Chapelle des Narcisses during a charming ceremony. I had the joy of going to join Yin and her two children in Atlanta. As for Claudio he has just spent a year at Cartier in Miami, which was a really great experience for him. Isabella, for her part, spent a trimester at the German school of Medellin and came back overjoyed. Finally Theo has grown so much that at the age of fourteen he is almost as tall as me. He plays a lot of sport. I am so blessed to have six great kids and six grandchildren. They are my treasure. As for Ana Maria, she is working at present in the field of immuno-hematology and has started travelling for her job. She takes it to heart. Furthermore her good-natured personality means that she is surrounded with many friends. Of course, to say that life is always a bed of roses would be conceited, as with many families there are those who have health problems and those fighting for what they consider important to them. Nonetheless the essential things remain the same: understanding for each other and sharing a mutual love.

Finally, I would not have been able to give up the international side of things, which in my view, allows one to keep an open mind and to savor all the various delights that life brings. Whether it’s France, England or Germany, I have gone there so often that I feel at home. We enjoyed a short stay with my family in a village in Crete. We were on an organic farm, cut off from everywhere and in a completely authentic surrounding. We also visited the ruins of Knossos, where a sophisticated matriarchal civilization once blossomed. In Singapore, one of my friends brought me along to take part in the ceremony celebrating Buddha’s Enlightenment, a long nighttime procession to the sound of hammered gongs. One takes three steps, prostrates oneself, then one stands up again and takes another three steps, all this lasting for three hours in a row. In the same region, I had the privilege to explore the Sumatran jungle, where I found myself face to face with some orangutans, a peculiar encounter with these big monkeys who are not so far away from us on the evolutionary scale. I passed on two occasions through Thailand, with those traditional markets teeming with various aromas, colors and life. Equally, I enjoyed a beautiful moment at the Great Mosque of Abu Dhabi, which was like something out of a fairy tale, with its blue bulbs and golden colonnades that glistened in the night. Other mirages included the giant aquarium from Atlantis City in Dubai and a nighttime walk through the old medina in Casablanca.

On the other side of the Atlantic, I was impressed by a moving visit to Ground Zero in New York and then by the veritable hive that is the CNN Centre in Atlanta. The Palme d’Or winner however occurred during a stay in Antioquia, in my wife’s homeland. I literally adored going up the powerful River Cauca in a rubber dinghy. It’s a turbulent river that guzzles up dozens of lives every year but which is located in a beautiful setting, at the bottom of a valley in the heart of the Andes. Well above this river, perched on an eagle’s nest between mountains and mists, there nestles the village of Jerico, so staunchly religious that they even have a bishop there. One would think that one was still living in the era of Spanish colonization. One feels one is breathing the air from yesteryear there except… there is a modern art museum installed in a venerable colonial residence.

Ana Maria and I wish you a merry Christmas, a cheerful holiday and a great 2016, full of new discoveries and happiness.